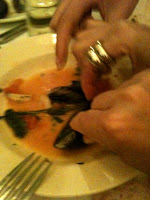 The reason this crusade is so hysterical is because it is not really about the pope at all – it is about the New Atheists themselves. The contemporary pope-hunting springs from a secularist movement which feels incapable of asserting a sense of purpose or meaning in any positive, human-centred way – as the great atheists of old such as Marx or Darwin might have done – and which instead can only assert itself negatively, in contrast to the ‘evil’ of religion, by posturing against the alleged wickedness of institutionalised faith. It is the inner emptiness, directionless and soullessness of contemporary secularism – in contrast to earlier, Enlightened and more positive secular movements – which has given birth to the bizarre clamour for the pope’s head

Secularism is in crisis. In Enlightened times, progressive secular movements, those which eschewed the guidance of God in favour of relying on mankind to work out what his problems were and how to solve them, were all about having a positive view of humanity. Their vision was both terrifying and extremely liberating: that man alone could master the complexities of life on Earth and improve it for himself and future generations. Today, however, we live in misanthropic, deeply downbeat times, where mankind is looked upon as a greedy, destructive, unreliable force whose behaviour and thoughts must be governed from without.

Indeed, one of the newspaper writers who cheered on the vengeance of Hitchens and Dawkins against Benedict used the very same column to argue that ‘ecocide’ – otherwise known as mankind’s impact on the planet – should also be made a ‘crime against humanity’. It perfectly illustrated that it is not faith in humankind that drives today’s ‘muscular secularism’, but something like its opposite: a profound confusion about mankind’s role, a discomfort with the world we inhabit today, a powerful sense of isolation amongst contemporary New Secularists – isolation from other people, from any coherent ideas, from any stand-up system of meaning. Driven more by doubt and disarray than by a desire to Enlighten, the New Secularists come across as alarmingly intolerant of any system of meaning which, unlike theirs, appears to have some coherence and authority.